Collaborated with pumibless and Shantanu Nair

It's been only two days since you've had your last meal (an ordinary occurance as a starving artist), but you've been staring straight at your moniter screen for the past 48 hours. Nonstop. Unblinkingly searching for anything - photos, videos, any articles and interviews of the MAN, the legend himself, Keanu Reeves. You obviously hold a very unhealthy obsession with the man, but who am I to blame you for your devotion? (Honestly speaking, great choice!)

However, at one point your eyes begin to droop so low until you can no longer raise your eyelids. The last thing you see before they completely close is flash of light that seems to engulf you. When you awake you feel yourself seated in a comfy, velvety cushion... But now's not the time to drift back to sleep. What seems to be in front of you is a wooden round table with five other individuals seated in their own chair. The same characteristic that you all share seems to be heavy bags underneath your eyes that imply extreme lack of sleep.

You are the first to voice your confusion of this place, while others follow suit. It's only until one of people surrounding this table, a purple-headed girl with thick, black frames, starts babbling out incoherent words except for two that clearly spell out a very, VERY, familiar name, that you feel you realize why everyone is here.  For the five-star Keanu Reeves. After this thought, you feel as though the air has gone still, and that a dangeous glint has appeared in everybody's eyes, but you're the same. You too wish to hold the card in your hands and to feel the cold warmth of it. And for that reason, you all draw your cards.

The goal of this game is to acquire as many targets as possible. This will be done by placing trait cards and arguing/discussing with your fellow Love Rivals. The first player to get 15 total stars wins the game. If no one has 15 points by the time all the targets have been captured, whoever has the highest points wins the game.

Targets: Capturable love interests that are rated by stars (1-5 stars), each love interest has blanks to be filled "by trait cards"

Action Cards: These are cards that will be used during play to either draw new cards, replace a love rival's trait card on the field or a special card that only the Mediator of Love can use 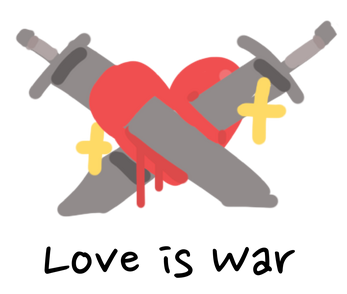